Category: A book of letters

Judul: People of The Book 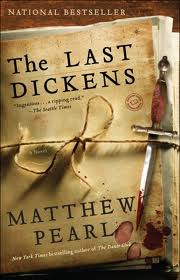 It was 1870 in Boston, and the news about Charles Dickens’s death had just reached his publisher in America, James Osgood. The news could not become more sensational, because at the time of his death, Dickens was writing his latest novel, The Mystery of Edwin Drood.

Afraid that the book pirates would take advantage of this situation, Osgood asked his trusted clerk, Daniel Sand, to await the arrival of Dickens’s unfinished final manuscript at the Boston dock. But Daniel never returned, found dead in Boston street, and his death remained a mystery for Osgood.

Osgood decided to go to London, accompanied by Daniel’s sister Rebecca, to find out about the rest of Dickens’s final manuscripts, and trace back the last days of the great writer’s life.

I have read The Dante Club, another literary mystery by Matthew Pearl, and quite liked it. I also have read what remains of The Mystery of Edwin Drood and the story (and mystery behind the writing) always mesmerized me. So I guess it’s totally normal when I put high expectation of this book. The premise was so good- about Charles Dickens’s last unfinished novel, was there any chapter left besides the ones that finally made into the book? And what’d it like to be in Dickens’s world, became a part of his complicated famous life?

I really wanted to like this book a bit more, but I was pretty stuck at the plot. I think it’s quite interesting to know about Dickens’s past life, his flaws and greatness, and the characterization of the legend was quite decent. The fact about book piracy in those days- where copyright laws had not been established for foreign authors and publishers – was very captivating too. There was this hard competition between publishers to be the first that could publish Dickens’s works- even though they did it illegally.

I think those two main things would be sufficient to make a fast paced, cool literary mystery and thriller based on historical facts. But unfortunately, Pearl wanted to do more. And sometimes, too much is just too much, it feels like eating a dish with too much salt.

Pearl also put other subplots about opium trade, secret organization, and even an unnecessary story in India- involving one of Dickens’s sons who worked as an officer there. Honestly, the ending of this book- the twist and answer of all the mysteries- was not convincing at all. It’s a bit too much, too complicated without being smart. I’m pretty disappointed on the ending. The Last Dickens is a perfect example of a book with good premise- but was executed in a wrong, wrong way.

In a Dickens story, readers were not asked to aspire to a higher class or to hate other classes than their own, but to find the humanity and the humane in all. That is what had made him the world’s most famous author. (p33)

And this book, sadly, didn’t do much justice to that quote 🙂

Matthew Pearl is an American novelist and educator. His novels include The Dante Club, The Poe Shadow, The Last Dickens, and The Technologists and have been published in more than 40 countries.

Pearl graduated from University School of Nova Southeastern University (NSU). He attended Harvard College and Yale Law School and has taught writing and literature at Emerson College and Harvard University. He lives in Cambridge, Massachusetts.

In 2012, his novel, The Technologists, was published in the United States.

Pearl has also written op-ed articles on literature and culture for The New York Times, The Wall Street Journal, and The Boston Globe.

Ivan, a one-time world traveler, and Francesca, a ravishing Italian heiress, are the owners of a bookstore that is anything but ordinary. Rebelling against the business of bestsellers and in search of an ideal place where their literary dreams can come true, Ivan and Francesca open a store where the passion for literature is given free reign. Tucked away in a corner of Paris, the store offers its clientele a selection of literary masterpieces chosen by a top-secret committee of likeminded literary connoisseurs. To their amazement, after only a few months, the little dream store proves a success. And that is precisely when their troubles begin. At first, both owners shrug off the anonymous threats that come their way and the venomous comments concerning their store circulating on the Internet, but when three members of the supposedly secret committee are attacked, they decide to call the police. One by one, the pieces of this puzzle fall ominously into place, as it becomes increasingly evident that Ivan and Francesca’s dreams will be answered with pettiness, envy and violence.

This is a story about how the World War II had changed people, even in the area that not many had thought about. Juliet Ashton is a writer living in London, and one day after the war has ended, she receives a letter from a man who lives in Guernsey Island, Dawsey Adams.

Dawsey is one of the members of Guernsey Literary and Potato Peel Pie Society, and from him Juliet find out about the time people in Guernsey had to face during the German occupation, when England seemed too busy protect the mainland and had forgotten about the little islands in the channel. From Dawsey, Juliet was introduced to people in Guernsey, who tried to fill their time during the war by reading books and discussing them in their book club.

It is so touching when I realized that books can be people’s friends in any time and situation. It can make people still feel alive, and have something to talk about. It helps them to survive during the war. And that’s what I love about this book.

But since this novel was written in letter format, I feel the characters are a bit one dimensional. We can’t tell much about them except from the description Juliet said in her letters to her publisher, Sydney, and her friend Sophie. The other members of the society just felt flat for me, including the founder Elizabeth McKenna, who had an affair with a German soldier in the island and was sent to concentration camp during the war.

Because of the letter format, it is also a bit hard to remember everybody’s names and who is who, especially because there are a few people who only wrote the letter once to Juliet, and they are just hiding behind the story afterwards, as if their part is just a later addition to the book. The only character I like is Sydney, Juliet’s publisher who is pictured as a merry/nice/but had a mysterious background. Sadly he didn’t show up much in the book, although most of Juliet’s letters were directed to him. Anyway, this is a nice book about book lovers and how books had changed and helped people during the tough times. But for me, something is missing from this book. A pure soul maybe? Or more convincing characters? Not sure. But I like the historical part, especially because there are not many books told stories about Guernsey.

Guernsey location in the channel. Pic from here.

Guernsey is a British Crown dependency in the English Channel off the coast of Normandy. For most of World War II, it was occupied by German troops. Before the occupation, many Guernsey children had been evacuated to England to live with relatives or strangers during the war. Some children were never reunited with their families. The occupying German forces deported some of the residents to camps in the southwest of Germany, notably to the Lager Lindele (Lindele Camp). Guernsey was very heavily fortified during World War II out of all proportion to the island’s strategic value. German defences and alterations remain visible. (taken from here).

This book is also submitted for What’s in a Name 6 Challenge, for the category “things you find in a kitchen”.

Zizou Corder is Louisa Young and Isabel Adomakoh Young, whose names are too long to fit on the front of a book.
Louisa is a grown-up and has written five grown-up books; Isabel is a kid and has written mostly schoolwork.
The original Zizou is Isabel’s lizard, only he spells it Zizu. They Have written five books together: the highly acclaimed Lionboy trilogy, Lee Raven Boy Thief and Halo.
They live in London. Only one goes to school.