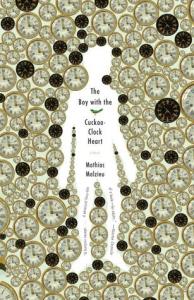 Title: The Boy with the Cuckoo-Clock Heart

Stepping into this story is like entering a magical world full of possibilities. It was 1874 in Edinburgh, the coldest day on Earth, and Jack almost didn’t make it when he was born on that day. Fortunately, Dr. Madeleine (who helped her mom gave birth to him), saved him by placing a cuckoo clock in his chest to strengthen his heart.

Jack was abandoned by his mom but Dr. Madeleine gladly took him. Getting older, Jack had been given some rules and advice by Dr. Madeleine if he wanted to live long with his cuckoo clock heart.

Firstly: don’t touch the hands of your cuckoo-clock heart. Secondly: master your anger. Thirdly: never, ever fall in love. For if you do, the hour hand will poke through your skin, your bones will shatter, and your heart will break once more.

But when he was 10 years old, Jack met a girl who made him fall in love hard. He knew that the risk was high, but he decided to follow his heart anyway. The girl was missing, though, so Jack had to do unimaginable things from having the worst kind of enemy, to travel far across the continent to find the love of his life. Even though during his journey he faced danger and met with foes, he also found true friends and a key to unlock the girl’s heart. But is it worth the risk? Is love worth his life?

Mathias Malzieu wrote this story as the basis for an album of his band, Dionysos. No wonder, you can feel the magic, fairy tale-ish atmosphere throughout the book, as if you are listening to an incredible music.

You can’t help but rooting for Jack to find his true love, and even though some of the romance parts of this book were too sweet for my taste, somehow it fits nicely with the whole tone of the story. The journey itself became an important part of the book, not only the physical journey with all kinds of mesmerizing settings, but also the journey inside Jack’s heart and how he tried to accept the unthinkable about his life.

What I love the most is the way Malzieu chose the ending of this book. It’s bittersweet and unpredictable, made me amaze of his imagination and I immediately rereading some parts of the book after I finished it for the first time, just to make sure I didn’t miss any important details after knowing the ending.

Malzieu wrote this book in French, but the translations to English by Sarah Ardizzone is incredible too. A simple, magical book to start my year.