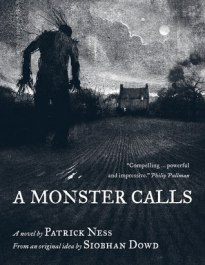 Lately, I was craving for a tearjerker, a book that can make me cry and bawl my eyes out. I think sometimes in life, you will need to release the emotions bottled up inside you. Otherwise, you’re getting hard inside.

So I tossed and turned, read some books that people said will bring my tears out, but I haven’t found one that could successfully satisfy my need.

Until I opened A Monster Calls.

The story revolved around a boy named Conor O’Malley, whose mother was very sick because of cancer. Since her mom was dying, Conor had repeatedly been having a nightmare, a nightmare so scary that he could barely sleep at night.

One night, another nightmare suddenly came -literally- into his life when a monster – an old tree monster- entered his house and haunted his life. The monster would tell three stories to Conor, but he asked Conor to tell him his own story, about his recurring nightmares that had made his life miserable.

Meanwhile Conor’s life kept on deteriorating. He lost his friends at school because he turned down everyone, there were some bullies who chased him everyday, he had to live with his grandma who was making him crazy, and his father chose to live in America with his new family, than to live with Conor.

Only the monster knew Conor’s feeling. But the lessons that he gave Conor required Conor’s bravery, faith and hope. Things that Conor has already forgotten about. And he’s not sure if he could bring those things back into his life.

A Monster Calls is a reminder for all of us on how to face our grieves. How to let go of things and people we love the most. How to lose someone and still face the world bravely.

It’s a beautiful, moving book with haunting illustrations, lyrical prose and dark atmosphere. It’s a book for children and adults, a book for people who just lost someone dear, a book for anyone who love a good story. A recommended book, period.

6 thoughts on “A Monster Calls by Patrick Ness”