Title: The Devil in The White City

It was 1890 and Chicago was brimming with anticipation. The Windy City had been chosen to host the World’s Fair in 1893, and the preparation just started with a blast.

Daniel Burnham, a distinguished architect in the city, supported by his partner John Root and other architects from all over America, were ready to create the most wonderful, magical event the world would see- surpassing the one just been held in Paris.

Big ideas, boiling arguments, tight deadlines, and turning the impossible into reality, Erik Larson could capture the back story of the World’s Fair in vivid details, with so many historical and juicy tidbits, all of them very interesting. You were drawn to follow the incredible journey they took to transform a hopeless landscape into a magnificent place called The White City, with gigantic buildings, innovative designs and wonderful attractions.

Meanwhile, darkness was also lurking in Chicago. One of them was in form of a man named H.H. Holmes. He took the advantage of the chaotic atmosphere in Chicago to enhance his hobby: murder.

Many women were missing during those days- due to the newly surfaced job opportunities for women, and sense of adventures that fulfilled the city and captured most women’s hearts. Families didn’t realize of their missing female members until a long long time, and Holmes seized the chance, using his charm and fake identity to fool the ladies.

A historical event and a serial murderer, who else could combine those two topics in one entertaining book but Erik Larson? For a newbie in history books, I feel drawn into the story immediately. Written as if a novel, Larson presented the story in chronological order, with lots of historical details and data cross check. It didn’t feel like reading history book, sometimes I almost forgot this is really a non fiction and these crazy events were totally real!

My favorite parts of this book are the ones describing the details of World’s Fair creation- including the first ever Ferris Wheel. And because this is a non fiction, don’t expect the ending will be smooth and happy for every one. 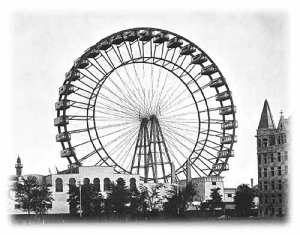 Larson said in his introduction “However strange or macabre some of the following incidents may seem, this is not a work of fiction. Anything between quotation marks comes from a letter, memoir or other written document”

Because sometimes, real life is stranger than fiction, isn’t it?

This book is totally recommended for every reader who likes to plunge into history- but still feels afraid on doing it. To quote Chicago Sun-Times review:

Larson is a historian, with a novelist’s soul.

Larson is the author of four New York Times bestsellers, most recently In the Garden of Beasts: Love, Terror, and an American Family in Hitler’s Berlin, which hit #1 and remained on the printed list for 35 weeks.The Devil in the White City remained on the Times‘ hardcover and paperback lists for a combined total of over three years. It won an Edgar Award for nonfiction crime writing and was a finalist for a National Book Award; the option to make a movie of the book was acquired in November 2010 by Leonardo DiCaprio. (YAAAS!)

Category: Not My Cup of Tea