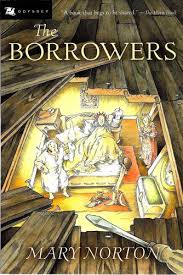 Who are the borrowers?

They’re this little people living in an old country house in England. They lived by borrowing things from “human beans”- that’s what they called the big people- from cigar box for their bedroom to the dolls teacup for drinking tea. There used to be more Borrowers, but now the only one living in Aunt Sophie’s house is the Clocks: Pod, his wife Homily and their daughter Arrietty. They tried to survive without being seen – especially by the crude housekeeper, Mrs. Driver.

And then the boy came…

Aunt Sophie’s grandnephew came to be healed from his illness, and one day, the inevitable happened: he’s seen Pod and Arrietty. But Arrietty, as a lonely little girl, was actually quite happy and gradually became friends with the boy. Sadly, a disaster emerged when the Clocks were discovered by the evil Mrs. Driver, and they were forced to move out from their comfortable house. Can they survive?

I’ve heard so much about The Borrowers before but never had a chance to read their books. It’s a classic, very neatly written even though the style was a bit old fashioned. I like the imagination of Mary Norton, using everyday tidbits as essential things for the Borrowers. I also love the characters in the book (except for Mrs. Driver of course!), especially Arrietty with her curiosity. It’s exciting to think of the Clocks’s next adventures.

After the first book, there are four more stories about the adventures of the Clocks. Their titles are alphabetical and alliterative:

Can’t wait to collect them all!

8 thoughts on “The Borrowers by Mary Norton”