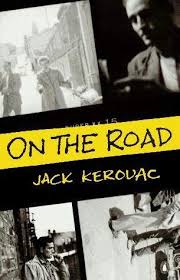 Title: On The Road

Sal Paradise was a struggling writer from New York, who lived with his aunt in New Jersey. The summer of 1947 changed his life forever, when he decided to travel across the country to the west coast by hitchhiking. Along the road he met so many wonderful, bizarre people with their own reasons to do the journey. In Denver, Colorado, Sal stopped for a while and reunited with his longtime friends, one of them was Dean Moriarty, a central part of Sal’s stories. Dean was a complicated soul who couldn’t choose between Marylou his first love and then current wife, and Camille, a beautiful good girl who’d love to be Dean’s next wife. During this part of the journey, Sal also met with a girl who captured his heart. But then again, he had to come home to New York.

Sal was surprised when Dean came to see him at Christmas 1948, with Marylou and Ed Dunkel, one of Dean’s friends. Together they embarked on a journey to the South, to see their friend Old Bull Lee, a morphine addict who lived in New Orleans. Southern countries mesmerized them and the journey brought Sal closer to Dean. Dean was a free spirited soul who always needed to move, to go, to be on the road. Sal and Dean tried so hard to find IT, the final destination, the main reason of their constant searching- whatever and wherever IT may be.

In this part, Sal tried to bring Dean to the East. Dean had a terrible life in the west- he’s itching to go far away even though he’d settled down with Camille and even had kids in San Francisco. For the first time, Dean came with Sal to stay in New York. But did they finally find the IT?

Sal had some money from his book selling and he decided to go south to Mexico, for writing another book. He left Dean in New York (Dean was settled down with a girl named Inez), but of course Dean couldn’t hold himself, he drove to Denver and met Sal there, eager to join the best trip they would ever have. Mexico was full of craziness and it’s a whole new adventure for Sal and Dean. But Sal could see who Dean really was during this last journey of their friendship.

My Journey With On The Road

In the beginning, I thought I would not enjoy this book. So many reviews said this book is pretentious, overrated, full of boring narrative and hipster characters. But surprisingly, I really enjoyed this book. Sure, sometimes the narratives are too long, but the word choice are incredibly good so I didn’t have time to feel bored.

The absurdities of many of the scenes are actually pretty hilarious too, I laughed at their foolishness and didn’t think their pretentious at all. This book was basically written based on Kerouac’s personal journey, and he created the characters based on his friends and acquaintances. It all felt really convincing and believable, as if Kerouac knew his characters that well (and of course he did know them!).

The humor, sarcasm, and irony he used in this book were all spot on. The never ending search of the meaning of life, the mysterious IT that Dean and Sal were so obsessed to find out. I guess it relates well for most people. Do you ever think that it’s not about the destination – it’s the journey that really counted? This is the perfect book to understand that point. No wonder this book becomes the ultimate, quintessential book of travels – because aside from the crazy, beautiful places Sal and Dean visited, the most important journey was to seek the meaning of their lives.

I actually feel bad for Dean – because there are people like him, who constantly searching for trips and adventures, for women and love, but still couldn’t find what he’s looking for. And it sucks big time XD

This book became an inspiration of Beat Generation and Beat literature. Beat Generation was a group of American post-World War II writers who came to prominence in the 1950s, as well as the cultural phenomena that they both documented and inspired. Central elements of “Beat” culture included rejection of received standards, innovations in style, experimentation with drugs, alternative sexualities, an interest in religion, a rejection of materialism, and explicit portrayals of the human condition.

Many elements in this book were in line with the Beat Generation – Dean and Sal (and all of their friends) often did not have any money with them, only depended on people’s kindness to take them by their vehicles or put them in work. Lots of drugs, free sex, and alcohol abuse along their journey. If you want to find out what America was like during the 40s-50s, On The Road captured it perfectly. Not only the beautiful parts of course (New York City, Denver, Chicago, New Orleans, San Francisco!) but also the dark side of it (poverty, drugs, sexual abuse, and many more).

Jack Kerouac had written a letter to a student in 1961, and it’s perfectly described the meaning of this book:

“Dean and I were embarked on a journey through post-Whitman America to FIND that America and to FIND the inherent goodness in American man. It was really a story about 2 Catholic buddies roaming the country in search of God. And we found him.”

This book made me rethink more about my life, and I think that’s a good travel book should do to you. Not only you want to embark on the journey to visit all places that were described in the book, but also to rethink your destination – and how the best ways to get there. Wherever it will be 🙂

-On The Road has been made into a movie in 2012, directed by Walter Salles, starring Sam Riley (Sal Paradise), Garrett Hedlund (Dean Moriarty), Kristen Stewart (Marylou) and Kirsten Dunst (Camille).

-Many traveling knick knacks are inspired by this book. These are some of my favorites: 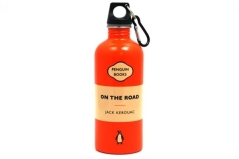 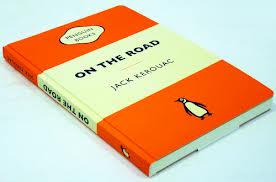 And my fave: travel journal 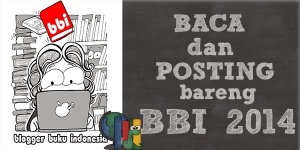 11 thoughts on “On The Road by Jack Kerouac”