Once upon a time

There was a boy, introvert and shy

Falling in love with a beautiful girl

Who had beautiful green eyes

They became friends, until one day

A great school of magic called both of them

girl and boy (pic from here)

The girl became popular, but the boy stayed the same

The girl fell in love with a cool popular guy, but the boy stayed the same

The girl got married and had a kid, but the boy stayed the same

The girl was killed by the wicked wizard, and the boy was brokenhearted 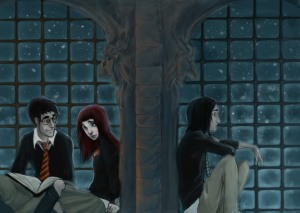 the triangle. pic from here

And the boy has become a teacher there

They both hated each other

But still loved the same girl

The girl with the beautiful green eyes 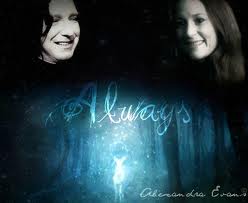 after all this time? pic from here

And no matter what happened

Through the bad and the worst

The boy who’s now a great wizard still loved her

And when asked by the headmaster:

“After all this time?”

So for me, the greatest love of all Harry Potter books,

is Severus and Lily.

And how lucky you are, if you have someone who loves you like Snape loves Lily =) 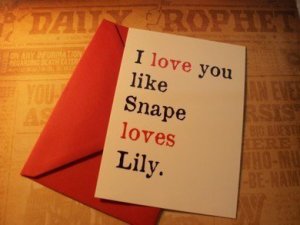 ps: the bad side if this couple really made it? There would never be Harry Potter! So better to keep them in my imagination then =)

This post is submitted for Hotter Potter event- February Meme. The question for this month is: “Who is the most wonderful couple in Harry Potter books?” or for me, maybe it will be: “Who do you think could make the best couple?” =)