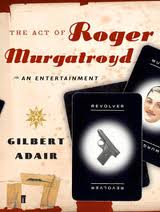 Title: The Act of Roger Murgatroyd

Bought at: a secondhand bookstore in Plaza Semanggi (IDR 20k)

I found this book accidentally when browsing in a secondhand bookstore in Plaza Semanggi (bummer I forgot the name). The premise immediately caught my heart: a witty homage to Agatha Christie’s The Murder of Roger Ackroyd, a classic whodunit with a period country-house setting, a witty and clever parody of one of the most famous detective story writers.

I grabbed the book, and the first pages mesmerized me, it seemed like I found a gem (with a bargain price indeed!). And I was excited when I read somewhere that Gilbert Adair wrote several other books based on Agatha Christie’s famous titles. Cool!

Unfortunately, I made a premature conclusion. Halfway during the book, my spirit was getting lower and lower. The story itself was actually fine. A group of old friends gathered together for a cozy Christmas in a manor on the edge of Dartmoor, somewhere deep in the countryside of England. The year was 1935, and it was in Boxing Day (the day after Christmas) when a tragedy occurred.

One of the guests (who was actually not belong in the circle) was found dead, murdered in the attic of the old house. To make it worse, there was a snowstorm that made it impossible for people to go outside-or go inside, leaving the other guests as suspects. So who was the murderer? The colonel who owned the manor (and had a vague past), the famous actress who loved all kinds of drama, the nice vicar and his wife, or the good old village doctor?

Fortunately a retired police inspector lived not far from the manor, and he was soon in charge, interrogating all the guests while they opened their secrets from their pasts. But before the inspector could conclude anything, here came our heroine, also a guest in the party, Ms. Evadne Mount, the writer who was famous for her whodunits (mystery books).

But to tell you the truth, this is where the book lost me. Evadne Mount was a bit like cheap imitation of Jessica Fletcher (from Murder, She Wrote) and Agatha Christie herself (in this book, Evadne even mentioned Agatha as her rival). But her cockiness didn’t capture my heart. She’s far from lovable, and the very slow story was not helpful either. The conclusion was also flat, and the twists that should have made the story more interesting, were actually not too surprising.

All in all, it’s not a really bad cozy mystery.  But don’t expect anything near Agatha Christie’s works. It’s entirely in different level 🙂 (and it’s a pity actually, because who doesn’t want to take a peek of Adair’s next books with titles like “Mysterious Affair of Style” or “And Then There Were No One”?)

Homage is a show or demonstration of respect or dedication to someone or something, sometimes by simple declaration but often by some more oblique reference, artistic or poetic.

Aldair was not the only writer who paid homage to the Queen of Crime. Victoria Laurie wrote one of her mysteries, Ghouls, Ghouls, Ghouls, based on her admiration of Christie’s masterpiece, And Then There Were None. Meanwhile, Louise Penny’s The Brutal Telling was located in a small village inspired by Ms. Marple’s famous home, ST. Mary Mead.

5 thoughts on “The Act of Roger Murgatroyd”